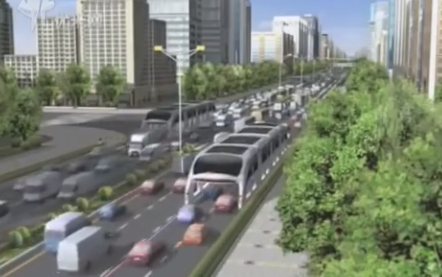 A company in China has designed a ‘giant bus’, known as the ‘Straddling Bus’ which can drive over cars. The bus which runs on wheeled legs carries more than 300 passengers, has electric motors and can even run on solar power. The bus will need to have rails on the road to run on or simple white lines that an automated system can use as guidelines. These ‘giant buses’ and the road adjustments are predicted to cost in the region of £46.5 million, Whilst this seems like an incredible amount this is only 10% the cost of the equivalent distance of underground railway, meaning these buses could be the future…

The bus is believed to reduce traffic congestion by 30% in China’s busiest cities and each bus can bring down carbon emissions by 2,640 tons in a single year! The bus can run over cars, but under overpasses which saves road space, efficiency and crowded buses.

Could this be the future of British buses? How would you feel with these giant buses around? How would you feel travelling over all the cars below or travelling under the bus? Maybe this would encourage people to use the buses more as one of the biggest problems with buses is their reliability which is affected by traffic. These buses also mean journeys would be quicker as you wouldn’t get stuck in traffic.

China is looking at starting the straddling bus scheme in Beijing’s Menougou District in the ‘near future’. Here at PBA we are looking forward to seeing this idea develop and hope one day this can come to Britain and help make sustainable travel even more appealing!

← Smartcards – the future of sustainable trave
A Journey Shared Is A Journey Halved! →